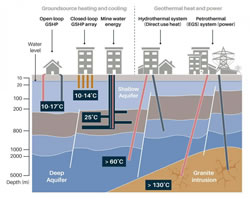 Geothermal is:
• Cheaper than fossil and other renewable heat sources in many Member States according to the International Energy Agency ADEME, the French energy agency, found that the levelised cost of geothermal district heating was €15 MWh compared to €51 MWh from fossil sources already in 2019.
• Good for property values: In Sweden, household retail agencies found houses with Geothermal Heat Pumps increased property prices by about €10-12,000.
• The ‘go to’ solution for urban and rural cities: Cities all over Europe are opting for large-scale geothermal district heating systems.
• Grid balancing: Geothermal provides baseload electricity solving security of power supply threats by removing dependence on the import of fossil fuels from third countries.
• Available everywhere. Heat reservoirs and basins have only been mapped in some regions and in some countries. Over 25% of the EU’s population can be supplied by geothermal district heating by using resources mapped in 2013. Combined with geothermal heat pumps , nearly half of the EU’s heat demand can be met by 2030.

The term ‘geothermal energy’ refers to any heat derived from the ground, from depths of a few metres to multiple kilometres beneath the Earth’s surface.

Low-grade heat stored in the shallow subsurface (<200 m) is largely derived from solar radiation that is absorbed by the ground and distributed via natural groundwater systems and artificial structures such as flooded coal mines. The ground acts as a solar battery and, for this heat, utilisation usually requires a heat pump. This energy is widely described as ‘ground-source energy’ or ‘shallow geothermal energy’.

There is no strict definition for ‘deep geothermal energy’, but the UK Government has adopted the term to refer to heat resources derived from depths of >500 m. The heat of the Earth increases with depth, a phenomenon described as the geothermal gradient. This heat is partly the primordial heat from when the Earth was formed and partly heat generated from within the Earth’s crust from the decay of mildly radioactive elements. This upward heat flux varies across the globe, but in the UK is around 27°C/km (Busby, 2014). Assuming an average annual air temperature of 12°C, this means that subsurface temperatures at 1000 m, 3000 m and 5000 m are around 39°C, 89°C and 139°C, respectively.

Exploitation of this low-grade, ground-source heat resource requires use of ground-source heat pump (GSHP) systems (Figure 2). These extract heat from the ground either via ground heat exchangers (i.e. pipes installed in the ground through which a heat carrier fluid is circulated: ‘closed-loop’ systems) or from pumped groundwater stored in aquifers (‘open-loop’ systems) and mines. These systems utilise a heat pump to extract the low-grade heat from the fluid and upgrade it to more useful temperatures (>40°C) required for the heating of buildings. The cold carrier fluid/groundwater is then returned to the subsurface.

Ground-source heat pumps can be used for heating, cooling or both, i.e. heating during winter and cooling during summer.

The availability of different types of GSHP systems (closed-loop; open-loop; hybrid; mine water systems) and flexible design options mean that deployment of these systems is feasible almost anywhere in the UK.

Subsurface temperatures in the UK are around 39°C, 89°C and 139°C at 1000 m, 3000 m and 5000 m, respectively. While these temperatures (classed as low enthalpy) are below the economic threshold for conventional (steam turbine) power generation (which is >160°C), they are sufficiently high to provide heat for direct-use space heating as well as for a variety of heat-intensive industrial processes and agricultural applications.

In conventional hydrothermal systems (Figure 2), the heat is transported by natural groundwater, circulating within deep aquifers. It is exploited via a so-called ‘doublet system’ consisting of two deep boreholes drilled over a range of depths down to 5 km: one is for abstracting the hot water and the other is for re-injecting the cooled water back into the geothermal system. Various regions exist within the UK onshore where such hydrothermal systems could provide a geothermal resource. These often coincide with areas of high heat demand; for many areas of the UK it would be technically feasible to exploit geothermal resources for space heating using district energy schemes.

Medium-enthalpy geothermal potential exists in the UK in areas where geological anomalies, e.g. the presence of radiogenic granites, have resulted in increased heat flows, e.g. Cornwall; northern England; Scotland. Temperatures at economically drillable depths (around 5 km) are sufficiently high for power generation with binary-cycle power plants or for industrial and residential (direct-use) heating, but granites are not naturally porous — they typically have less than one per cent pore space — or water-bearing. The heat is abstracted by injecting water into the system and circulating it between two deep boreholes through existing or enhanced fluid pathways, creating what is known as an engineered geothermal system (EGS).